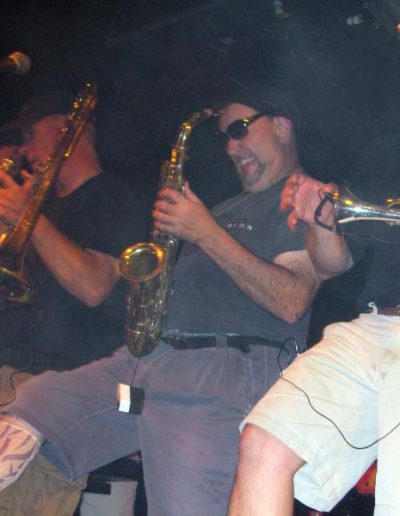 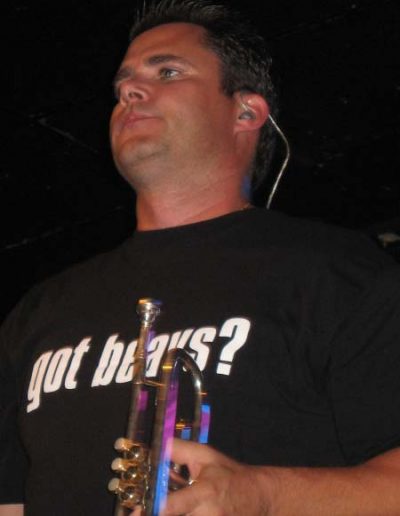 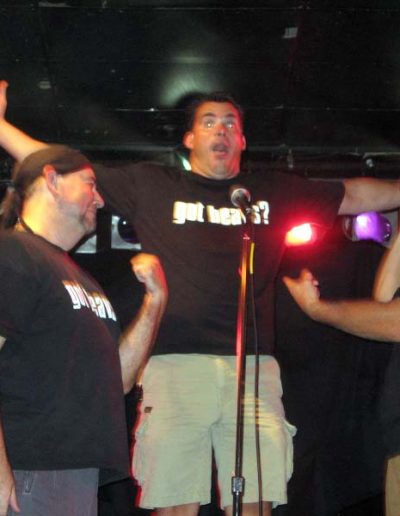 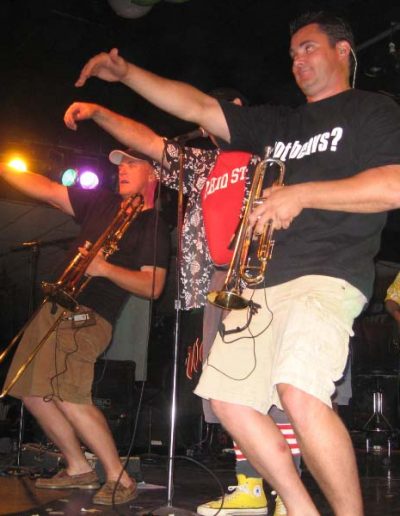 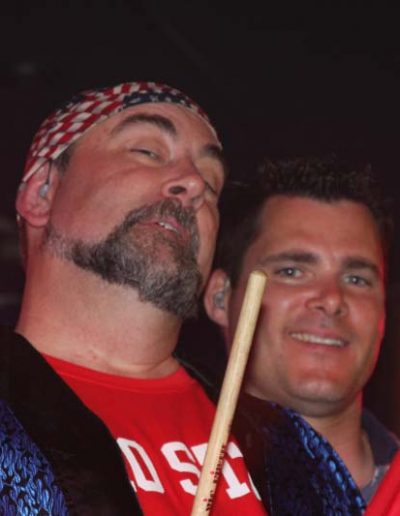 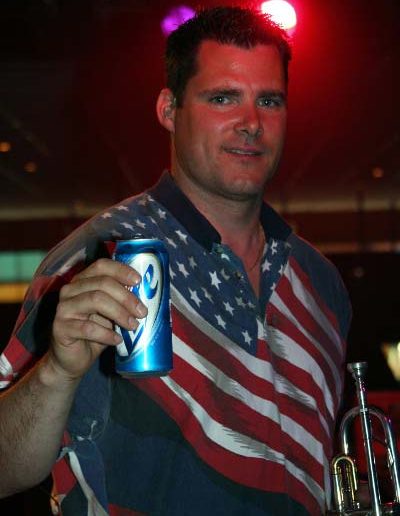 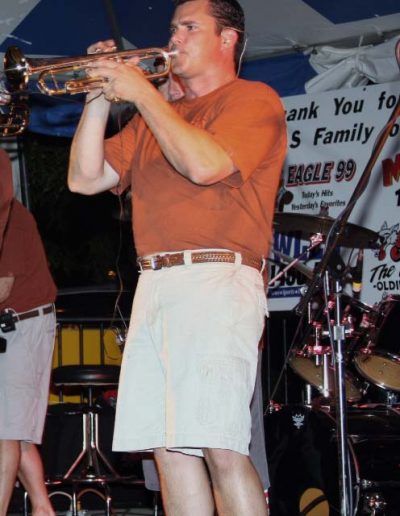 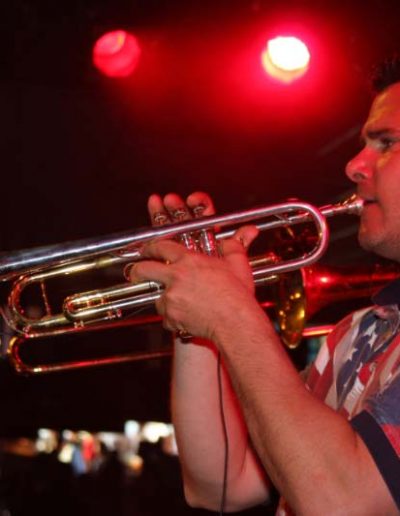 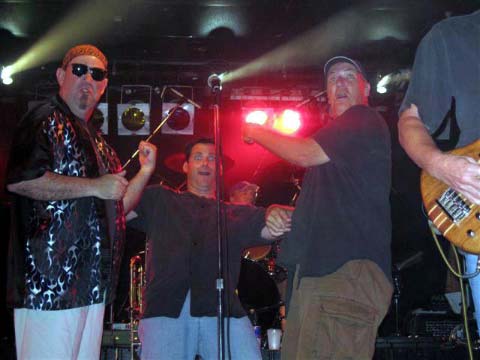 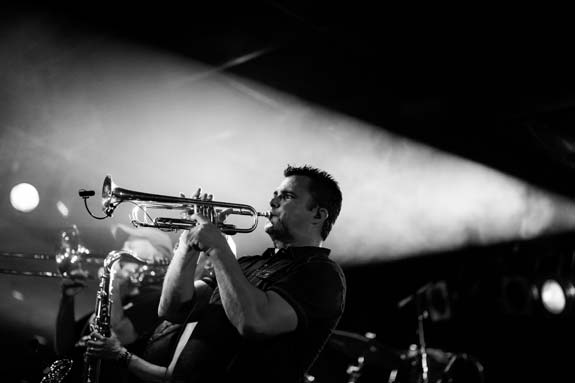 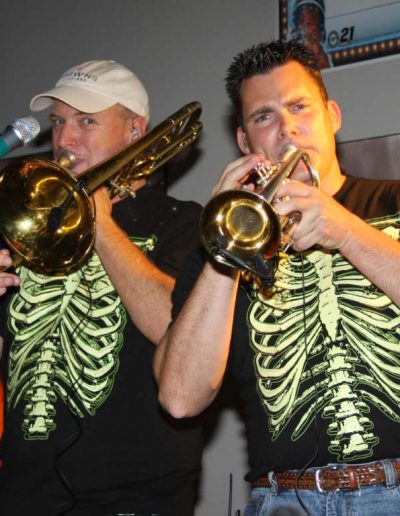 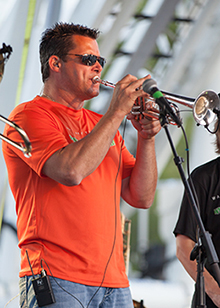 A graduate of Bellevue High School in 1983, Ed Adams (christened Eddie Forte by Wally and Boz) began his professional life employed as an auto mechanic; until he got tired of being dirty, hot, and dripped on. Today, Ed is the owner of Forte Music: with stores in Tiffin and Sandusky. In 2022, Forte Music celebrated their 35th Anniversary! Ed is a freelance trumpet player in the northern Ohio area. Over the years Ed has played trumpet with a wide variety of musical groups, including locally; Heidelberg Brass Band, Tom Cat and the Horn Dogs, Rude Mood, Xpando Band & Firelands Symphony. Ed still performs with, Olde Mill Brass Quintet and Big Red Deluxe. Ed’s one claim to fame with a national artist was performing with Frankie Avalon. In the spring of 2007, Ed got the call to play full time with Wally and The Beavs. Wally is especially impressed by the travelin’ trumpeter’s full head of hair; accented by a healthy application of Dapper Dan hair cream: a habit Eddie picked up from his “dripped on” days as a mechanic.

Even though he was born in Cincinnati, Ed is an avid Cleveland sports fan. He especially enjoys tailgating at Browns home games with fellow season-ticket holder, Boz.

After a lot of pleading from Joel and several months of contract negotiations, Ed agreed to design and take care of the new website for The Beavs. Most of the well-written paragraphs you’ll find on this site were from the penmanship of Wally, the real talent in our band.

In August of 2022, Ed realized the Beav web page needed a major update, many thanks to Liamer Media of Tiffin Ohio, for the new and improved version that Ed will continue to update.

His beautiful wife, Jeanine, is also a musician and music teacher. Ed and Jeanine have 2 adult children, Lily, who is the artistic director and owner of the Fremont Ballet School. Seth is attending BGSU for business.

While other beavs were gigging with rock bands in the early 80’s, Ed was in the high school band. 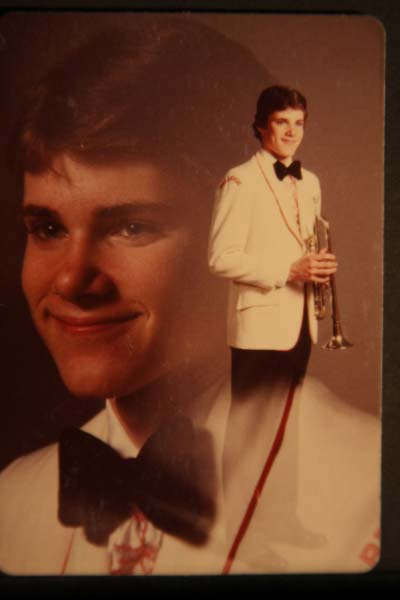